It’s that time of year again. With the high school baseball season coming to an end here in Florida and the off-season getting under way, many young athletes will begin heading to the weight room or gym for strength training to go along with their summer travel ball schedule.

This is usually the time I get the most questions from players about what they should be doing in the gym. Since many kids and families can’t afford a trainer or strength coach, they go to the internet to seek out the best/most convenient resources to help guide them through the infinitely confusing process of developing a training program – or they side-step all of this and opt to just wing it.

Finally, after a few years of this, I decided to take a few minutes to compile tips that I usually give out for everyone to get in one place. Although not exhaustive or advanced by any means, these tips on laying out a training plan for the summer should be enough to help you get started and feel comfortable with the strength training process you are about to embark upon…

1. Laying Out the Training Plan

I’d suggest separating your program into 3-6 week cycles, with each phase focusing on a certain aspect of training. Here’s one common and simple way to lay out your training cycles…

An example of high volume work would be 4 x 10 on a Back Squat.

An example of time-under-tension work would be 4 x 5 on a Back Squat with the eccentric portion of the lift (lowering the weight) performed on a 5-second count.

I, personally, tend to prefer more time-under-tension work for beginners, as the slow rep tempos require lower loads (you will be less likely to overload the bar beyond your means) and methodically slow movement, which can allow for better motor learning. High volume work (i.e. a ton of reps) can turn sloppy very quickly, especially with beginners who haven’t established a strong foundation for proper movement.

An example of strength work is 5 x 4 on a Back Squat, with intensities/loads nearing your 4 rep max. We don’t necessarily want to hit failure on any of these sets like you would be doing when performing Hypertrophy work. The goal isn’t “shocking” the body with muscular fatigue and damage, it is steady overload of the nervous system and muscles in order to create a neurological adaptation. Leaving 1 rep “in the tank” for most sets is a good way to go about this.

*Force and velocity are inverse in nature. To simply illustrate this concept, imagine a person performing a Back Squat with two different loads. In this example, the person has a 1-Rep Max of 225 lbs. If this person were to use a heavy load of, say, 200 lbs. (which requires a great amount of force) they would not be able to move the bar with as much speed (velocity) as if they were lifting 135 lbs., since 135 lbs. requires less muscular force.

Essentially, the more force that is required, the less velocity is attainable because maximum force generation takes longer to produce than sub-maximal force.

An example of Power/Speed work is is 7 x 2  on a Back Squat with 75% of your 1-Rep Max, performed rapidly. Another example would be Medicine Ball throws/slams/tosses.

At the end of all three cycles (hypertrophy, strength, power) you can start back again at the beginning, and ideally you should be able to use more progressive exercises or greater loads. 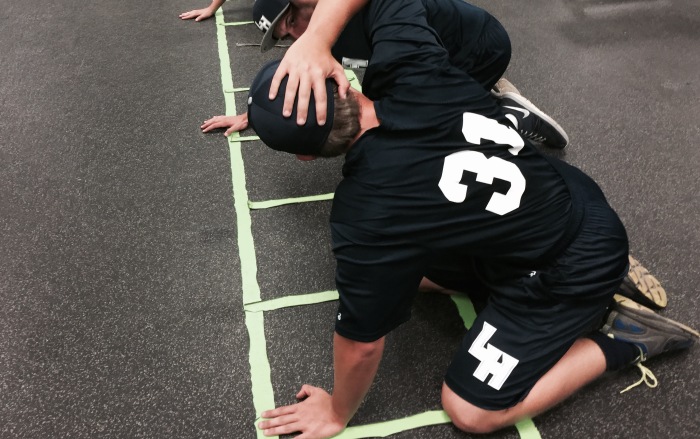 While the programming here is rudimentary, and the considerations are not exhaustive or extensive by any means, the hope is that this takes you from knowing nothing about how to train yourself to a knowledge-base to build off of so that you can safely begin your off-season training.

If you have any specific questions about training, feel free to reach out via Twitter @Ryan_Faer or via email at ryanfaercscs@gmail.com