Whether you are an athlete or non-athlete, improving body composition can usually be a positive goal worth working toward. But, if done inappropriately, or if misunderstood, getting lean can have some very negative consequences to overall health and well-being, let alone athletic performance.

It is important to understand and evaluate the investment and toll it will take to “lean out”, and to take proactive measures in order to ensure that the process is done safely.

Today we will discuss three things that many do not consider when undertaking the process of getting lean:

For many people, leaning out tends to be quite the elusive goal, whether it be for a lack of commitment, dedication, education or ability. But, those that do follow through on lowering their body fat percentage and achieving those “washboard abs” will tell you that the accomplishment of doing so comes at a steep and hefty price on more levels than they originally expected.

Of course, there is the cost of diving into a caloric deficit as a result of changing nutritional and dieting habits. Then there is the commitment to physical activity, both in exercise and at work, and even at “rest” (e.g. spending lunch breaks moving rather than sedentary).

As you become increasingly more lean, the time spent training and meal prepping and all of that energy you exert to mentally stave off the temptations to break your nutritional program will become more gratifying as the results start to show themselves – at least, to you they will be. Others, though, may not find your transformation as pleasing or agreeable. I made this realization for myself in the past year, as not everyone around me loved my new physique as much as I did.

That is, until I saw Precision Nutrition’s now-famous infographic, “The Cost of Getting Lean”, which outlines the tangible and intangible costs of reducing your body fat percentage. You can read their entire article here, and view the infographic version of the article here.

Another article also resonated with me, this time it was a passage from an article on Built Lean:

Approximately 6-7% body fat for a man is a bit less extreme than competition bodybuilders, but it’s still hovering at a level that is not sustainable for most men. Around this level, or slightly less, the face becomes gaunt, and your family starts worrying about you. This 6-7% body fat level, which is achieved by many male fitness models when doing photoshoots, is characterized by muscle definition in all muscles and clear vascularity in most muscles including arms, legs, and even abs. Vascularity over the abs muscle is a sign of very low body fat. Clear separation of muscles as well.

These two resources helped me to consider that not everyone else in my life agreed with my body composition transformation or my goal to be skinny-strong because it doesn’t exactly appear healthy.

Whether or not it is healthy depends to what extent the process is taken, and how exactly the process unfolds. But, even if done in the safest and healthiest manner, you need to be prepared to have many people ask about your health and well-being, and to constantly hear them suggest that you eat a cheeseburger or two – something they never told me about getting lean.

#2 Your “Best Friend”, the Calorie Counter, Can Become Your Worst Enemy

I would never advocate being a calorie counter per se. Rather, I would want you or one of my athletes to learn the value and significance of whole foods and nutrients, and fuel the body in such a way that fosters healthy and safe performance/living.

But, there is something to be said for knowing the numerical quantity and contents of your food.

If not for anything else, the calorie counter can be a valuable tool early on in the pursuit of getting lean by a) creating an awareness of how various foods will impact overall caloric intake, and b) by holding you accountable for what foods you are consuming – not just calorically speaking, but in general: by simply making you log your food in a journal or tracker, you will be that much more painfully aware of each and every Snickers bar and bowl of ice cream you consume.

The point, though, that should be underscored from the above passage: “…the calorie counter can be a valuable tool early on…”

The words early on were not chosen by accident. While the nutrition tracker or journal is a helpful tool, it can also become an obsessive crutch. When the food scale becomes utilized to weigh fruits and vegetables (things we probably should not be so worried about) and when your social life becomes dictated by your phone’s calorie counter widget, that is when you know it has gone too far.

Your calorie counter can in fact begin to impact your relationships and manifest itself as road blocks in your personal life, causing anxiety, depression, and other major issues that may be more problematic than your [perceived] body composition concerns.

Here are some red flags that may point toward you having an unhealthy relationship with your food via a calorie counter:

Like any habit, this crutch can in fact be kicked. It can also insidiously grow worse and worse if not addressed – something they never told me about getting lean.

#3 Altering Your Physique Will Not Solve Your Self-Image Problems

Unless health concerns are the impetus for your body composition changes, setting the goal of reducing body fat percentage is generally driven by a desire to alleviate body image issues and insecurities. Who doesn’t want to be lean and muscular enough so that we look good in the mirror and feel good in public with our shirt off? 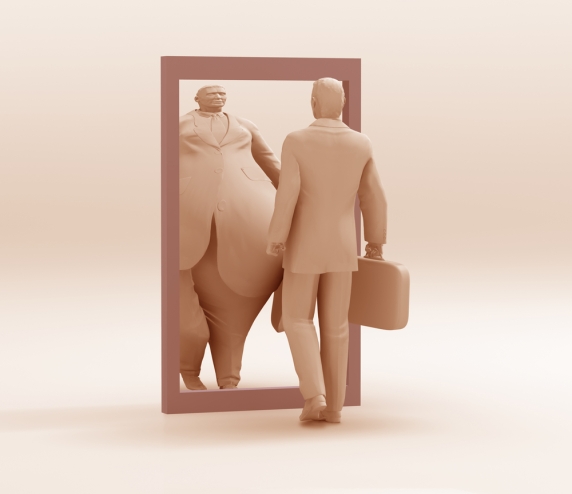 Many of us have been there before, myself included: wearing two shirts so that our rolls are less visible and we look sleeker; refusing to take our shirt off at the pool or beach despite the temperature nearing 100 degrees; avoiding the mirror or anything reflective so we don’t have to bear the feeling of disgust and the flooding of depression when we see ourselves.

We believe that, once we are lean, we can finally be liberated from these chains of self-oppression and self-deprivation.

And, while earning a better body can quell self-doubt and anxieties over appearance, and gives an enormous feeling of satisfaction through accomplishment, it may not actually attack the underlying issues – issues that are rooted in our psyche or mentality.

Those battling depression, anxiety, and/or other mental illnesses should not forget that these are often caused by chemical imbalances, and they can be hereditary.

Put in another way, depression, for example, is not acquired by making poor nutritional choices, nor does it build up gradually with every fat cell that our body stores and preserves. Thus, shedding the fat does not necessarily mean that you are too shedding the self-image or self-esteem issues.

Similarly, if you have a skewed perception of yourself (e.g. you are lean already but only see yourself as fat in the mirror – aka dysmorphia) then you may not even realize the progress you make, and can go overboard with weight loss or gain.

The point is this: for those who have deep-seeded issues in terms of self-worth and perception of oneself, getting leaner (and getting the body you want) may help alleviate some of the stress, anxiety, and depression, but chances are it will not solve the problem altogether – something they never told me about getting lean.